Jean Louis Teyssié was radioecologist at the International Atomic Energy Agency. "Atom for Peace" is the motto of the IAEA, which develops techniques to understand the impacts of nuclear and non-nuclear contamination in aquatic ecosystems. Environmental therapy is one of the main objectives of this United Nations organization.

The IAEA received the Nobel Peace Prize in 2005.

Passionate about Nature, JLT tries to educate the general public, through photography and underwater video, to the application of basic precautionary principles in terms of the management of aquatic ecosystems. He swims back to the rivers and canyons of southern France to photograph and film expressions of life in a few inches of fresh water. He tries to apply the results of scientific laboratory research in the field by focusing on heritage management and intelligent monitoring of ecosystems via bioindication to protect biodiversity.

Creator of the "Ecolomist" movement which reconciles a clean economy with a dynamic ecology, scientific advisor, JLT tries to apply the results of laboratory research in the field on a voluntary basis by giving priority to asset management and intelligent monitoring of ecosystems. Results: the rivers managed in this diagram have seen their animal populations resuscitated.

Who knows the caddis, the simulid, the plecoptera, the white-legged crayfish, the blageon, the sculpin, the gerris? Cleaners, recyclers, filterers, aquatic animals clean up the water in our rivers. Useful and creative, life is expressed in aquatic ecosystems to surprise us in its biodiversity. Each living entity has had a precise role in the balance of freshwater ecosystems for millions of years.

Bioindicators of clean water, diplomats of biodiversity, the water people are unknown to the general public. To discover it is to get to know it in order to better protect it and better protect yourself. He is our ally. To ignore it selfishly is to lose the memory of a thousand-year-old biodiversity and to reach the deserts of resources.

This people has been threatened for a hundred years by our industrial, domestic and tourist activities, our neglect of comfort, our waste.

If it disappears from our waterfalls, the water will no longer be cleaned, naturally balanced. It will be polluted and unfit for consumption. The people of the water clean the river beds and provide men with clean water that is less expensive to treat. Without these cleaners, these aquatic sentries, water treatment would be more and more sophisticated to have the luxury of taps and toilets (France is a country that uses drinking water in flushing toilets to evacuate urine and faeces. )

The biodiversity at our feet is in danger. Knowing it better means better protecting our rivers and its inhabitants from anthropogenic stress and climate change.

From water to pixel, the key is to get information out to the general public. There is no need to go to the antipodes to photograph the exotic flora and fauna, the proximity trip is at our feet and the total change of scenery in a few centimeters of water. Here is "The Water of Life", a precious possession that each of us must preserve. Only ecological citizenship, communication, education will save our aquatic heritage.

JLT presents an extract from his underwater photographic work. He exhibits at the United Nations in Geneva, Vienna, Monaco, the Cevennes and on the Côte d´Azur in France.

Biodiversity is an explosion of expressions of life. All the species of our planet have specificities that are very useful to men who seek information for their comfort. Man copies Nature to optimize his technology. He finds food and medicine there. To destroy nature is to destroy oneself. The example of the men on Easter Island proves it. To mismanage your natural resources is to disappear.

Water is everyone's good and it is high time to make it known to the general public to manage it well and waste it less. The water in our rivers is home to an astonishing biodiversity that is threatened by the human activities of a society in a phase of overconsumption. Each animal, from the smallest to the most visible, has a specific role in the food chains of our rivers. Their disappearance indicates an imbalance of the river, generates polluted water unfit for our consumption. The aquatic animals of our rivers are the guarantors of healthy water. More or less sensitive to pollutants, they survive with difficulty or they disappear from their ecological niche.

Bioindication and biodiversity are complementary. The animal and plant species that inhabit our planet are sensitive to contamination of ecosystems. They react specifically. They are sentinels or bioindicators. Some disappear, others resist and accumulate, retain, metabolize, transmit the contaminants released by humans into the food chains. The absence and presence of these bioindicators inform humans about the health of ecosystems and the interventions to be carried out to rehabilitate them. These interventions can be better targeted if the resistant species specify the type of contamination. It is easier and less expensive to measure contaminants concentrated in a living organism than dissolved in water, air and sediment. These bioindicators reflect the health of the biodiversity of our rivers.

The main inorganic and organic contaminants in waterways are micro and nano plastics, nano and micro fibers released by washing our clothes, cigarette butts, the abandonment of surgical masks in Nature, heavy metals, radionuclides, pesticides, fungicides, insecticides, hydrocarbons, detergents, fertilizers. The animals of the rivers integrate them by direct contact or by ingestion. These devious contaminants bio-magnify along food chains and accumulate from bacteria to humans. We find in fish at the end of aquatic food chains, heavy metals from abandoned mines (As, Pb, Hg, Cd, Ag, Zn, Mo, Co ...) Chernobylian radionuclides (137Cs) and in their nervous systems, their brains nano-plastics, carcinogenic nano-fibers resulting from degradation in the water of bags, butts, bottles, pipes, plastic materials, masks and surgical gloves. Nanoplastics and nanofibers, which are very dangerous for health, are already present in milk, cheese, vegetables, fish, game, drinking water, and…. beer !

Biodiversity is useful in the search for new molecules to treat many diseases, but with bioindication it becomes an incredible source of information on the ecosystem state of our rivers. This is one more reason to protect the aquatic animals of our rivers.

Hopefully the bioindication will save the biodiversity so useful to humans. Hopefully our river doesn't turn into Easter.
Jean Louis and his companion Ptiloup continue to snorkeled in the rivers of southern France. JLT has created a Cévennes aquarium in the old mill in the village of Plantiers where he exhibits from time to time. An aquarium bus is being planned to disseminate responsible ecological citizenship and environmental therapy adapted to climate change, to children in deep France. A freshwater underwater photography school project is emerging in the Cévennes. We must not give up. We must protect Nature which nourishes us, which protects us by communicating and informing. Photography has a great power of emotional communication.
So if you see two friends in wetsuits in the rivers of southern France: it's us! We continue to photograph and communicate. 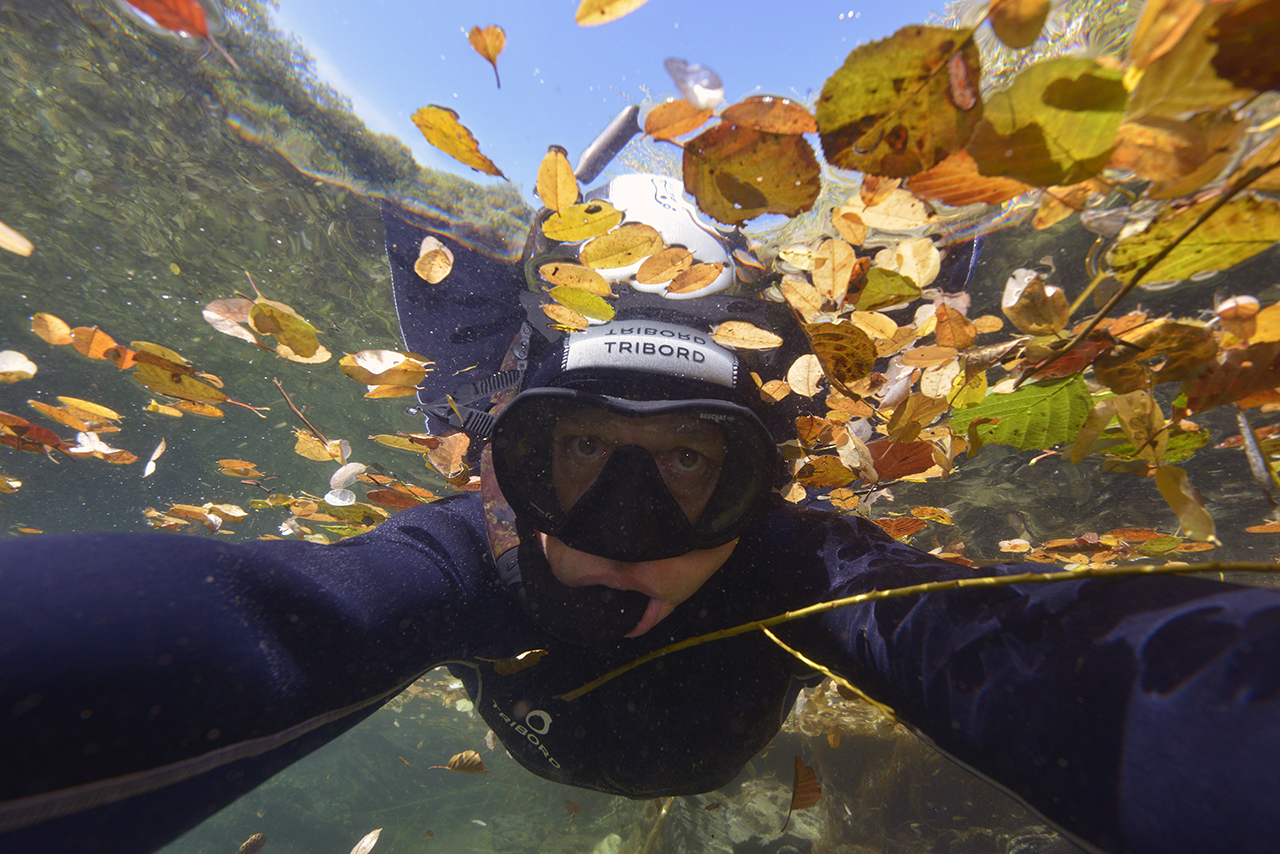